This guitarist has trained for three years in France with  Roberto AUSSEL & Javier HINOJOSA and has participated in several Seminars and training courses in Argentina and abroad.

He was selected one of the finalists for the International Scholarship Kate Neal Kinley Memorial and obtained a distinction in the U.F.A.M. Contest in Paris and got later a scholarship for two years granted by the International Cooperation Secretary from the Ministry of Culture and Education. He ended up his studies with 4 Golden Medals.

Director of the project of the School of Guitar in La Cumbrecita County and,  he worked intensively as performer also in Villa Berna and Villa Gral. Belgrano (Cordoba-Argentine).

He has worked as a soloist and with different Chamber Music Groups all over the country and gave concerts and auditions in Illinois, Köln, Nice, Paris & London. In 1999 he was the chose guitarist for the First Word Premier of “Octeto”, from Germán Cancián and “Viento Del Este” from Juan Pablo Simoniello. At the same time he performed the same year three concerts with Master Walter Heinze as soloist and Duet, dedicated to his works.

In 2002, performed the Word Premier of “Nebula-music for two Guitars” from the young Argentinean composer Fernando Schulmeier. In December he edited his first CD with works from Hans Werner Henze, Torû Takemitsu, Leo Brouwer, Fernando Schulmeier and Juan Pablo Simoniello and performed it in 2003 in Buenos Aires, and Dresden.

In 2004, he has begun with the edition from his second CD in La Habana, Cuba with works from Eduardo Martín and invited as the guitarist of the “Companía Oblícua” (Contemporary Music Ensemble), invited to work in 2005 at the Residencies Project in the Experimental Center (Colon Theater – Buenos Aires). With them have recently opened a first Cd “Latitud Sur”. 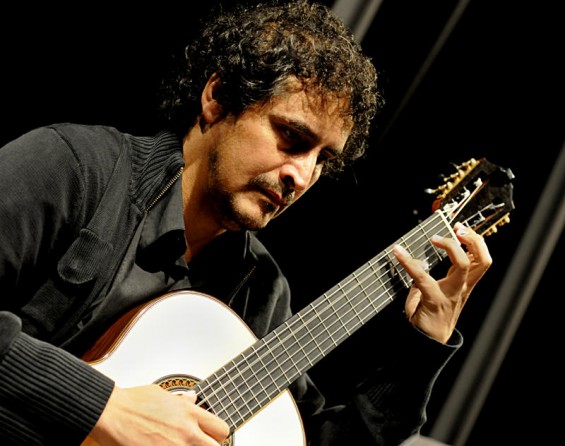 He participated as performer and member of the International jury of the “III and IV International Festival Cochabamba – (Bolivia)” in 2004 and 2005 and to open the “XI Festival Guitars of the World” 2005 and 2007 in Argentina, where he performed the premier of “Acrilicos en la Sonrisa”, his second CD.

In 2006 was selected to representing Argentine at the International Guitar Festival Bolivar Hall in Londonwith the generous support of the Argentinean Council and gave concerts and Masterclasses in the “Xème Rencontres de la Guitare Classique” (Nice-France).

He currently teaches in different points of Argentine invited to give conferences, Masterclasses and concerts. He is Professor at the Conservatoire « Henri Dutilleux » du Grand Belfort.

In 2007 edited two chamber music CD´s: “Kammermusik” (containing works from Takemitsu, Reich, Henze, Berio and Franciosi) and “Interludio” with the Whales’ guitarist Adam Khan (this work was opened in March 2008 at the “IX ICPNA Festival of Classical Guitar – Lima » (Perú) and  a 2nd. CD, « Voyage to Patagonia » was opened in july (UK tournée).

His last CD/EP was dedicated to Steve Reich’s masterpiece: « Electric Counterpoint » (available on CDBaby). In 2013 he founded « L’Ensemble de Sable ».

(…) Luis Eduardo Orias Diz (…) shows his quality as an interpreter and his intelligence to build his own repertoire in his brillant debut album; without any concessions, yet being attractive at the same time. »

« His performance (…) has mature composure, and exquisitely extracts lyrical atmosphere from the pieces. »

« (…) Luis Eduardo Orias Diz’ work is a very nice surprise from many aspects. …He adds to his impeccable technique a personal, vibrant and suggestive touch, inviting to meditation. »

Claudio Ratier, Cantabile Magazine-Buenos Aires
« In this programme of 20th/21st Century Music, the argentinian guitarist Luis Eduardo Orias Diz shows himself  to be of high technical and musical standard; his attention to detail in the score reading is very commendable.The three works by Henze,Brouwer and Takemitsu are dispatched with an enviable clarity in performance with the player demonstrating a remarkable delicacy where required. The two lesser known but highly interesting works by Schulmeir and Simoniello are well performed with diz being joined in the lenghty Viento del Este by some very capable musicians on piano,flute ,clarinet and a string quartet. »
Steve Marsh, Classical Guitar – England